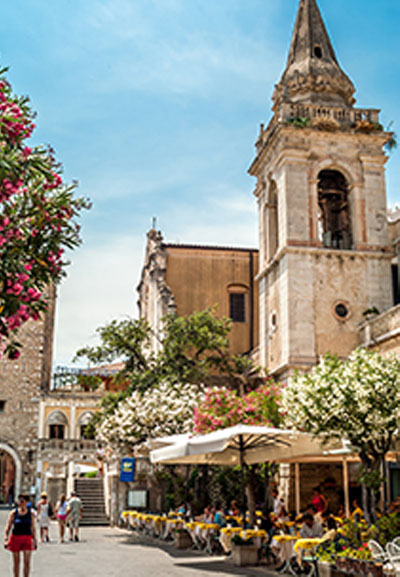 *This excursion will not be held on 8th December 2022

This excursions is only held with a minimum of 15 participants Sicily’s prime tourist resort was discovered by the British aristocracy in the mid 1800s. Facing Etna and the blue Mediterranean, this peaceful panoramic resort, 206m above sea level was colonized by the Greeks who built a theatre in the Hellenic period – 4B.C. The present Teatro Greco, altered by the Romans, is the venue for classical plays every summer.

The main street, the elegant Corso Umberto, with its cafés, restaurants and boutiques is a bustle of nationalities.

The largest and most active volcano in Europe. The climb to the crater takes us through picturesque villages and an ever changing landscape. The lower slopes of the volcano are extremely fertile with groves of oranges, lemons and other Mediterranean flora and of course vines which produce Sicily’s best wines. We go through forests of chestnut trees which gradually give way to oak, beech, birch and pine.